Fondation EURACTIV is a public interest foundation under Belgian law, set up in 2004. It brings together individuals and organisations seeking to shape European Union policies. It does not lobby and is not aligned to any political or faith group.

(Foundation’s baseline is being updated)

Our three pillars around one strategy: from think tank to events to trainings

The first pillar is centred on the European media policy. It targets EU circles and media top management.

Fondation EURACTIV is guided by an Orientation Committee and an Advisory Council composed of some 40 to 50 experts, and by a smaller board of ten members, the majority of which are non-executive directors who are otherwise unrelated to EURACTIV the media.

Our funding: diversified and transparent

Apart from re-imbursement of services invoiced and provided, neither EURACTIV.com nor any other partner receives money from grants awarded to our Fondation. The main costs include salaries and associated charges, rent, depreciation and utility charges, communications and other routine office administration expenses. The complete annual accounts of Fondation EURACTIV are filed with the Belgian Central Bank, as required under Fondation EURACTIV statutes (2016 Annual Accounts: summary since 2009, link PDF).

Some of our past projects

The #Media4EU research project interviewed more than 30 media experts from six countries about the parallel between the crises facing the sector and those facing Europe itself, as well as ways to foster better cooperation. (see EURACTIV Special Report #Media4EU: Can innovation beat the crises facing the EU and media?). #Media4Eu is a cooperation project between Fondation EURACTIV and the Université Libre de Bruxelles (Institut d’Études Européennes). Several issues feed discussion at European level: fake news and populism, shrinking business models, and the review of the Digital Single Market. Solutions could include a European strategy for the media sector, dealing with the Google, Apple, Facebook, Amazon (GAFA) challenge, cooperation across borders, and skill-building programmes for media professionals.

#Media4EU led to the Stars4Media pilot project (see brochure). This is an exchange programme for young media professionals, aiming at building key skills for the participants, boosting innovation initiatives, and developing sustainable business models (see list of moral supports). Find out more about it here.

Fondation EURACTIV #Media4EU is a partner of this project co-funded by the “Europe for Citizens” programme. Through local public debates in Central Europe, the goal is to identify sources of Euroscepticism. This project will lead to an innovative communication strategy based on a bottom-up approach to communicating the EU. Results of the project will be presented during a stakeholders workshop organised in EURACTIV’s Brussels Office on January 31st. Find out more about it here.

And sign up for our monthly newsletter to keep in touch with our projects! 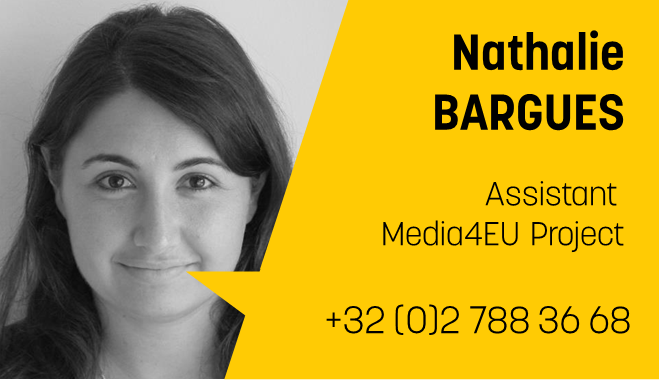